After a hiatus of six years, next semester I return to teaching autobiography.  The way in 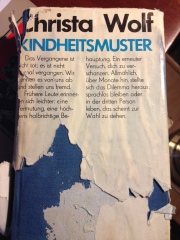 which we make stories of our selves very much constituted my early publishing, whether my first article on the American Lebenslauf (memoir) or the translation of a collection of them for what has been my “best-seller”, Moravian Women’s Memoirs.  Since those early days, I have become fascinated by what I call the other side of memoir, how we reach the point of writing our selves; and in my seminar next semester we will be exploring that question to become not only critics of the genre but also authors.

It is not easy to write the self.  There are uncomfortable questions of authenticity, insight, truth.  So we look for examples of this uncomfortable process in authors whose autobiographical texts are not personal hagiographies or political hero-stories (although we read those too); we examine the making of who we are as being inextricably bound up with how we live in and with history.  In German, this concatenation of narrative and time is conveniently bound together in the one word, Geschichte.

In her novel, Nachdenken über Christa T. (an impossible title to translate) Christa Wolf asks the question, “Was ist es, dieses Zusichselberkommen des Menschen?”  “What is it, this coming to the self of the human?”  Her answer in the novel is to come to her self through the projection of her identity onto a third person, a lyrical description of her relationship with a fictional friend, Christa T., who is dying of leukaemia.  Maybe as a rejection of the literary model of Socialist Realism that was still the critical paradigm in  1960s’ GDR, this subjectivity appears to be unaffected by historical context.  The only restricting limit on Christa T’s quest for identity is the socialist state’s demand on the individual that his or her needs are to be subsumed under the collective needs of the state.

It is only in her next work that Christa Wolf recognizes the traces of history on her identity.  In Kindheitsmuster (1976), (translated “Patterns of Childhood”) she explores her childhood in the Third Reich and comes close to an authentic exploration of the inter-meshing of historical and individual identity that had  been missing until then in the East German public sphere.  The self is not a hero of the socialist republic, not a rescuer of Nazism’s persecuted, but rather a complicit teenage fellow traveler.  One line sums up the necessity for personal and social self-examination in the exchange of looks between the liberated camp inmates and the German refugees from the East, “Wo habt ihr bloß alle gelebt?” “Just where have you been living?”

I read this book as soon as it came out in East Germany.  I was in Dresden and passed a bookstore where I noticed a large crowd of excited people grabbing books from a pyramid in the middle of the room.  It was Kindheitsmuster, which had just been reprinted in a limited number (the way in which the censors controlled the consumption of literary culture that was on the borderline of being politically acceptable in the GDR).  I too snatched a copy and began to read.

Maybe this was the right place to read the book:  Dresden, back in 1976, was still very scarred by the firebombs of 1945.  Heaps of rubble lay around the blackened stumps of Rococo churches, palaces, museums.  Among these charred stones arose the concrete, steel and glass boxes that acted as official signs of the “triumph of socialism,” ugly, anonymous, and efficient.  In some strange way, the novel’s complex multi-layered investigation of one woman’s pathway back to her childhood in the Third Reich was made tangibly parallel in this architecture.  The present is dependent upon the past, even when it does its conscious best to deny, negate, and erase it.

I am drawn to Christa Wolf’s picture of the inter-meshing of history and subjectivity because she goes on asking that question, What is it, this coming to oneself of humanity?  The uncompleted past is a past that is unconsciously patterned in our mind and that continues to determine our behavior until we consciously recognize its power and choose not to repeat it.  For my students, this is a difficult insight.  For their professor, it is a vital one.